Censure for a Nymphomaniac Diary

The poster of the Spanish ‘Diario de una ninfómana’ (‘A Nymphomaniac Diary’) film has been censured in Madrid and in Cadena Cope radio channel.

The poster wasn’t accepted by the dealer company of advertising for public transport interchanges and shelters of Madrid.
On the other hand, Cadena Cope radio channel said that "the campaign is of doubtful legality and gratuitously provocative", according to the explanation of the film’s director, Christian Molina, and they added that the film "wasn’t for their target, reason why they refused to show it".

Some people offered to Molina to change the poster, but he refused: "I sent one cut, another one in blank, because this is unjust, illogical and unreal. It seems to me of Dictator Franco’s times, retrograde and subhuman: I thought that there was freedom of expression in this country".The French Valèrie Tasso, author of the homonymous and autobiographical book, added "If the film had been called "An assassin diary" wouldn’t have been any problem". She added, "I’m shocked because in 2008, in Spain, ‘censors’ like these exist ".

Trailer of the film:

The director of the film, Christian Molina, remembered that the trailer of the film has the official certificate of the Ministry of Culture only for older than 13 years. "However, if we went to different kiosks of the Community of Madrid, we can see how the children have access to pornographic material".

Personally, I’m surprised because they have censured a poster like this when there are thousand examples of same or more provocative posters. And in this case the poster only reflects the history of the film. What is what bothers so much to them? 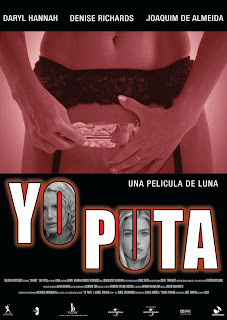 Web of the film: : http://diarioninfomana.com/