Gold for borning female in India 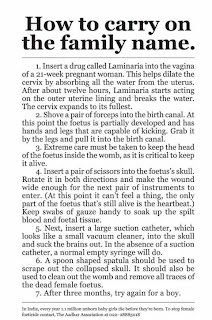 I have read one copy that gave me goosebumps. This ad has been Gold Lion in the press segment at Cannes International Advertising Festival in 2008. The advert tries to make aware against female foeticide in India. The campaign was realized by the Indian Contract Advertising Pvt. Ltd. agency for the non-government organization Aadhar, which fights against this curse.
The strength of the ad is in its forceful, clear, direct, overwhelming copy. Also, it is shocking because this is something more than advertising. For the poor families of India to have a daughter becomes a serious problem, due to the dowry that the woman is used to pay to her husband. In the second country with more population of the world, the abortion is legal since 1971. However, knowing the sex of the baby before being born is banned to prevent the frequent selective aborts.

The ad starts with the copy "How to carry on the family name". Then, it describes how to abort step by step. The final step is: "After three months, try again for a boy".

In opinion of the Press Lions jury president, Craig Davis: "It's wonderful that good work is coming out of places that were earlier not performing so well at Cannes. India is one of them. An entry like Aadhar 'anti-female foeticide' has beautiful copy".

From here, our congratulations to India and specially to the female copywriter Anshumani Khanna. We hope, more than never, that this copy will be not only powerful, but also effective.