Letter to a female creative 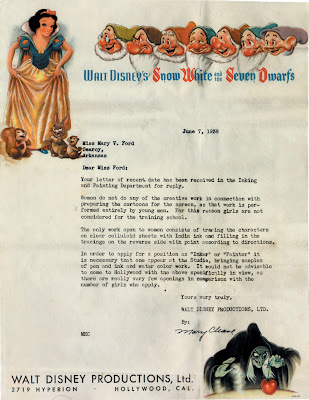 Dear Miss Ford:
Your letter of recent date has been received in the Inking and Painting Department for reply.Women do not do any of the creative work in connection with preparing the cartoons for the screen, as that work is performed entirely by young men.

For this reason girls are not considered for the training school. The only work open to women consists of tracing the characters on clear celluloid sheets with India ink and filling in the tracing on the reverse side with point according to drections.

In order to apply for a position as "Inker" or "Painter" it is necessary that one appear at the Studio, bringing samples of pen and ink and water color work. It would not be advisable to come to Hollywood with the above specifically in view, as there are really very few openings in comparison with the number of girls who apply. Yours very truly,

This letter, sent by Disney in response to a job inquiry made by one woman who applied for a creative position, is dated 1938.

Fortunately, 21 years later, a letter like this one wouldn't have a chance to be written. In 1959 in USA came to life a new law, stating that no candidate can be rejected because of his sex.

This letter approaches us the reality of those years, and makes us feel fortunate, considering legal advances and social awareness that we have developed since that time.